Big week this past week!  The airplane is on its own power!  With the help of my friend Jeff N1605A came to life on Saturday the 21st of February.  I will post a video soon (video is on Facebook now) of the event but it took several false starts before it eventually fired up and ran nicely.  After shutting down, inspecting for leaks and letting it cool off for a few hours Harry stopped by and was nice enough to do a pretty thorough inspection of the airplane.  Then he twisted my arm into starting it up again and taxiing it around a bit.  WOO HOO...it moved on its own power...next step the FAA inspection for the air worthiness certificate.  Its getting real folks!

I have to stop real quick and say how much I appreciate all the help I have received from friends and family both this week.  Amy has been a model of patience with me being gone so much getting the airplane ready.  Jeff and Harry have given me hours of their time to get this airplane ready to fly and I can't tell you how much that helps, not only from a task perspective but from a peace of mind perspective.  They have both built and maintained their own RV's for years and having experienced eyes on my airplane is invaluable!

On with this weeks pictures.

A day late and dollar short...sorta

Sorry for the late post this week.  I have been busy on that list I posted last week and I just didn't get time to put this post together until today.  I managed to get a few items removed from the list, and probably added a few as well but I am making progress.  I spent considerable time this week putting and electrical panel in my hangar so I can get heat going.  The good news is that I am almost ready for first engine start and if all goes well it will happen this week along with the final weigh in for my weight and balance calculation.  The weight and balance is key because I need it to submit the paperwork for my final inspection.  Woo Hoo!

Posted by Darin Anderson at 8:19 AM

It is so much fun seeing all of the parts come together.  This was a week of endless details but the big news is all of the major parts are now on the airplane and torqued down.  In fact bolts, torque and wiring pretty much sum up this week completely.  I did do more fiberglass work in the garage which is hardly worth taking pictures of but necessary.  It has been raining hard this week with lots of fog so there hasn't even been many airplane distractions at the airport.

First, here is where we are as of Sunday evening... 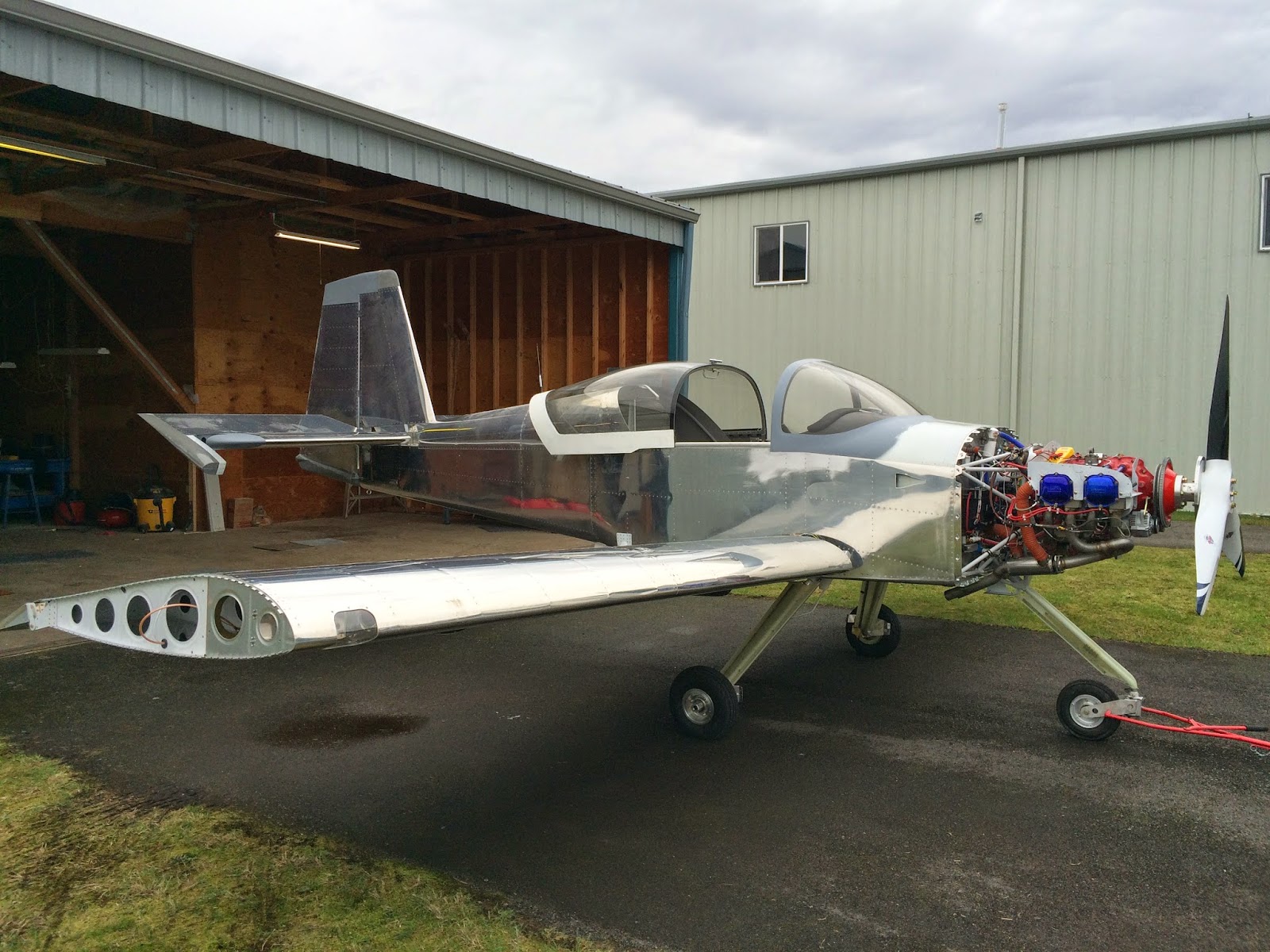 I'm going to start something this week and try to carry it through until first flight.  That being sharing my list of tasks that I have mentioned in the past.  This week I broke the list down into categories as you can see from the picture.  Still lots of tasks to complete but this way we can both watch them dwindle...at least until I add a few more. 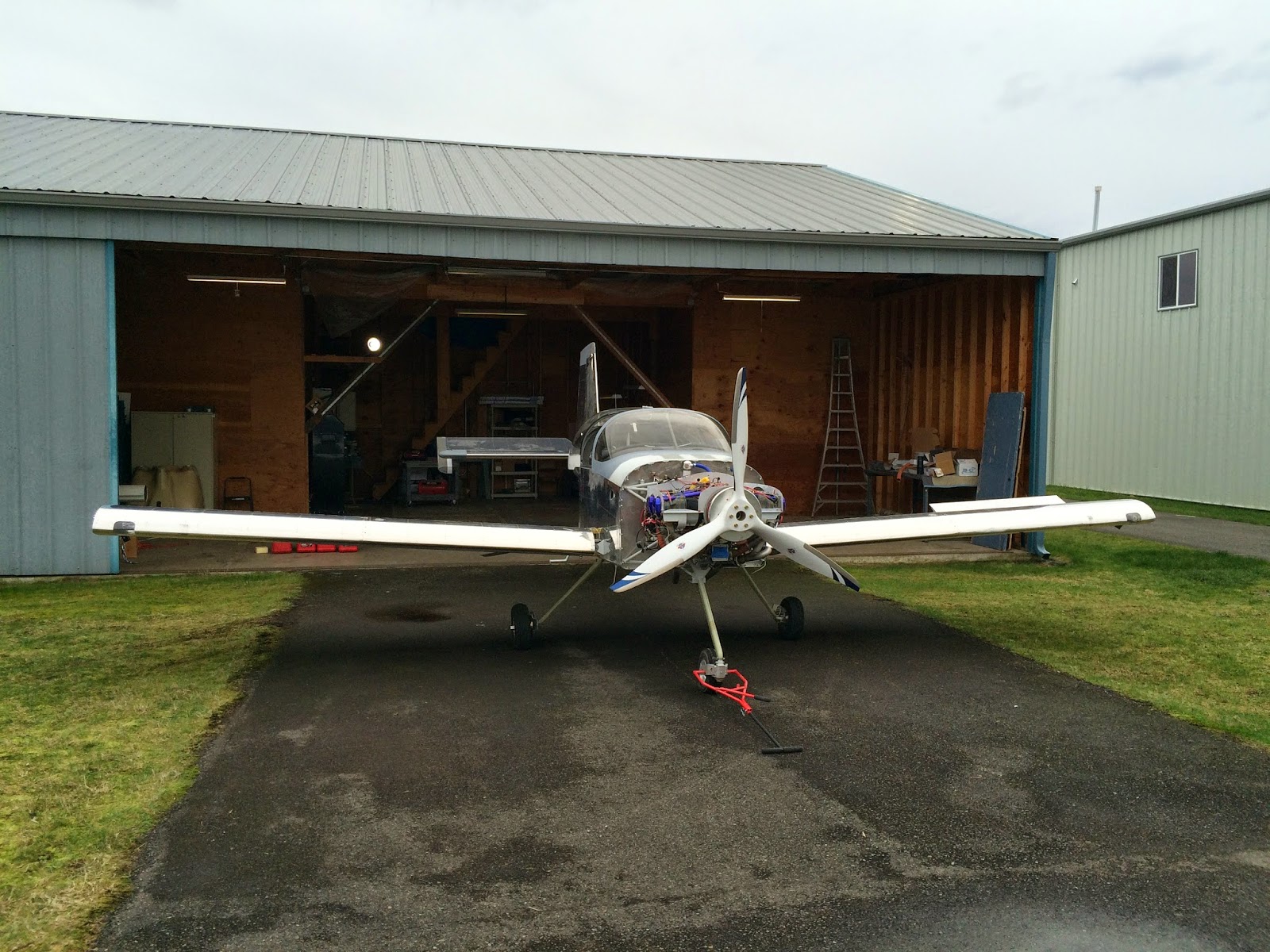 Posted by Darin Anderson at 5:54 PM

Back to the beginning

I was in the garage this weekend working on a few different tasks when I realized something...I am back to where I started.  If you look at what I have left in the garage it matches what was there 22 months ago when I started this project, the empennage.  I have been working both at the airport and at home and the items remaining at home are mostly fiberglass tasks on the empennage.  At the airport I don't have much for pictures because its been pretty much little tasks that don't really warrant a picture.  I have finished running the wiring in the wings, installed two outside air temperature probes, and installed some new lighting to help the light level in the hangar.  Lots of tasks but I find its hard to know what tools to keep at the airport and what to keep at home.  I did find that the hangar really needs some insulation because its darn cold in there.

One task I did get accomplished this week was to put the close tolerance bolts in.  When the wings were mounted last week we used a couple of temporary bolts and I was worried about how hard the final bolts would be to put in.  Turns out it wasn't as bad as I thought it would be.  I still have to put a few of the nuts on and torque the bunch but the worst part is done.

On with the show....what there is of it anyway.

Posted by Darin Anderson at 4:52 PM