Yep, I took a long weekend this past weekend.  Four days where Amy and I could spend some time together and just enjoy ourselves with nothing demanding our attention...that is unless you consider that airplane in the garage that just doesn't want to let me be!

Well, several things have happened since last we chatted.  First, the ailerons are done...finally.  Those leading edges were a bugger but they were easier the second time around.  Riveting went well and everything came out strait!  I am actually very surprised by that since that nose skin puts a lot of stress on the rest of the assembly.  But as you can see in the pictures below it actually came out great!

Next, I started the flaps.  Not done yet but made good progress...see pictures below.

Finally the big news, Amy and I drove Mariah down to Salem for her senior year at Willamette and on the way back we just happened to stop by Van's and picked up the fuselage kit!!  YEE HAW!  Yep, its home and I am not going to crack the top open until the wings are done.  So it may be a couple of weeks, but its here!

Oh, one more thing, I am making some engine changes on my airplane.  After endless debates with myself and far too many "you are doing what?!?" comments from others I have decided to not go with the 200 HP engine.  I am still going to use the block from the 200 horse engine because it is heavy duty, better rods, and a stronger crank.  As I mentioned before this block has many great things going for it.  I talked to Dave, the guy I bought the engine from and he is going to exchange my angle valve parts for newly rebuilt parallel valve top end.  That will give me a standard 180 hp engine and save a lot of weight.  Anyway, things are afoot in engine land.

Posted by Darin Anderson at 8:26 PM

The past couple of work sessions have been focused on the ailerons.  They are slightly challenging because the forward skin places significant stress on the rest of the assembly due to its half formed shape and the fact that is is thicker than the rest of the skin.  Mariah had to help me cleco the forward skin to the spar and then the plans call for a lot of weight to hold things still while match drilling.  Here is a picture of the finished product. 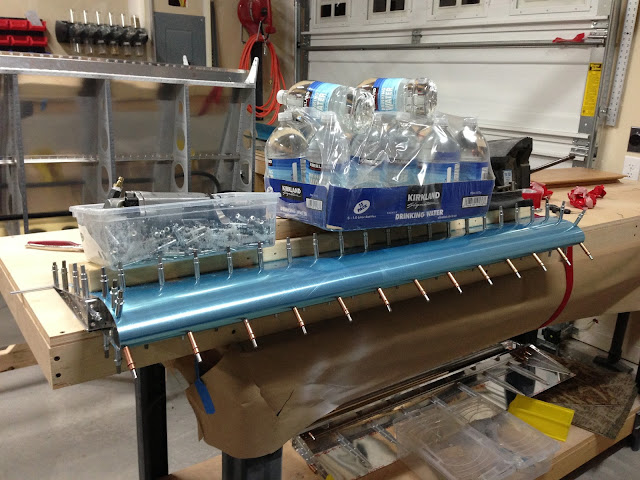 Posted by Darin Anderson at 7:02 PM

A lesson in dimpling

I have come to realize that a huge part of the quality of a set flush head rivet is the quality of the dimple that it is put in.  That was very apparent while working on the wing top skins.  Well today I decided to put to "paper" what I have learned so that I can refer back to it in the future and maybe somebody will stumble upon this article and it will help them.  I will most likely post this on VansAirforce.com as well so that I can get feedback and suggestions for things that I missed.

Anyway here is the story.  When I start dimpling I always put the male dimple in the bottom of the C-Frame and the female in the top.  That helps make sure the dimple dies are lined up with the hole, and not some random spot on the skin.  This is not always possible but when it is I do it.  Next, I always hold the female die down against spring pressure onto the male die.  This prevents the spring from bouncing around and allows me to be much more precise with my dimples.  Then I use multiple soft blows with the hammer to set the dimple.  The purpose of this method is really two fold.  You CAN hit the dimple too hard and harden the skin around the dimple which could lead to future cracks.  It also lets me watch the reflection of the C-Frame arm in the skin to see when the dimple is properly formed and I can quit whacking it.  I will try to explain with pictures...

Posted by Darin Anderson at 4:06 PM

Email ThisBlogThis!Share to TwitterShare to FacebookShare to Pinterest
Labels: Tip

Rivets that refuse to set.. or maybe its the riveter!

The last few days have been pretty detail oriented.  I have prepped and installed the aileron brackets, prepped and installed the flap brackets (with some notable exceptions) and installed the wing gap fairing.  I am now working on the ailerons.  The flap brackets proved to be a bit of a challenge since my 3x rivet gun does not fit into the spacing between the wing ribs with enough room for me to get my hand on it.  I tried a couple of rivets with poor outcomes so I have now ordered a couple of new tools.  First I ordered a small single offset rivet set that is shorter than the double offset I am using now, and second I ordered some rubber caps that go over the rivet set to help keep it centered on the head of the rivet.  The problem I was having was that the rivet set was "walking" across the top of the rivet and smashing it flat.  Lets hope the new tools solve that issue so I can get the last few rivets set in the flap brackets.

Today was cleanup day.  I decided I better start calling the garage a garage again since I bought a hangar and that could get confusing.  Anyway, I started out the day setting the last few rivets on the inboard edge of the right wing.  I had waited to do those until the wing was in the cart because its a bit of a challenge to get to them while they were on the build stand.  Then I took down the wing build stand and realized I just had a huge mess of stuff that I needed to store.  So, I started cleaning up the garage and rearranging stuff yet again.  A few hours later I was ready to get back to work on the wings.  I managed to get the aileron brackets installed but that is about it.  Tomorrow I will start on the flap brackets.

Wings in the cradle

Today is a big milestone day for me.  Let me explain.  When I first started this project I visited a couple of builders that were in the process of building their 9A's.  Both of them had their wings in a cradle and I thought to myself how far I had to go.  Well, now my wings are in the cradle, not complete, but off the building jig and into the cradle for the next step in the project.  I'm jazzed!

Dad helped me put together my "flat" 2'x8' table for building the ailerons and the flaps, and Mariah helped me finish up riveting the right wing top skin.  We all celebrated by going to Olive Garden for dinner!  Mariah's favorite, and a condition to gaining access to her help.  ;-) 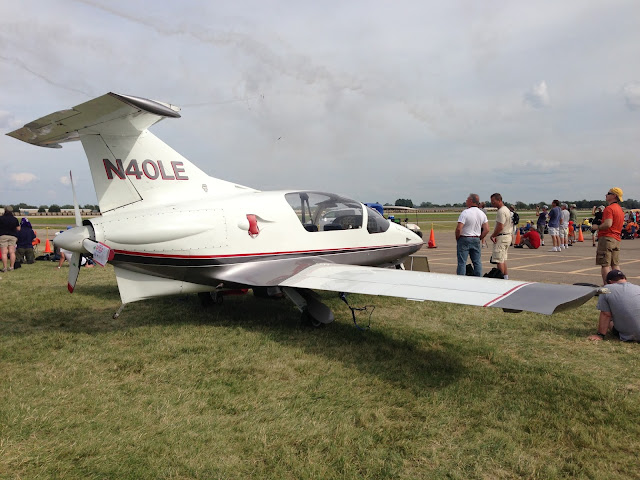 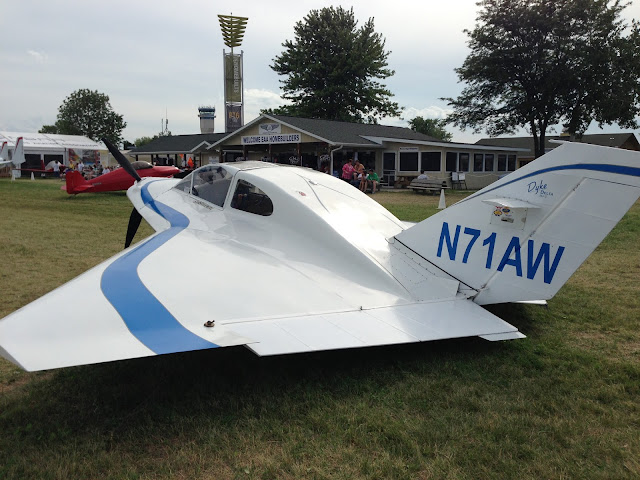 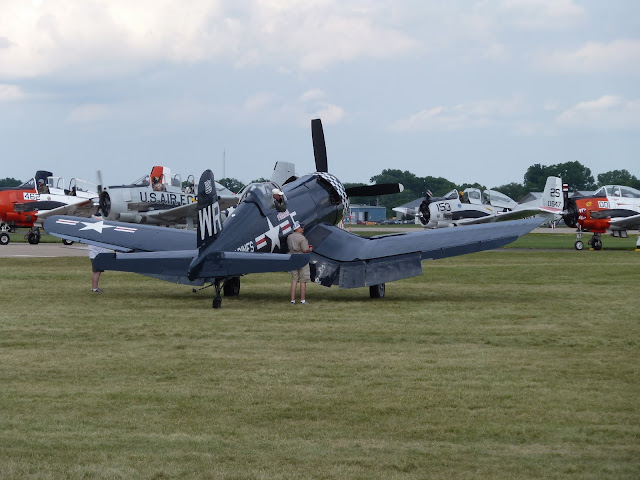 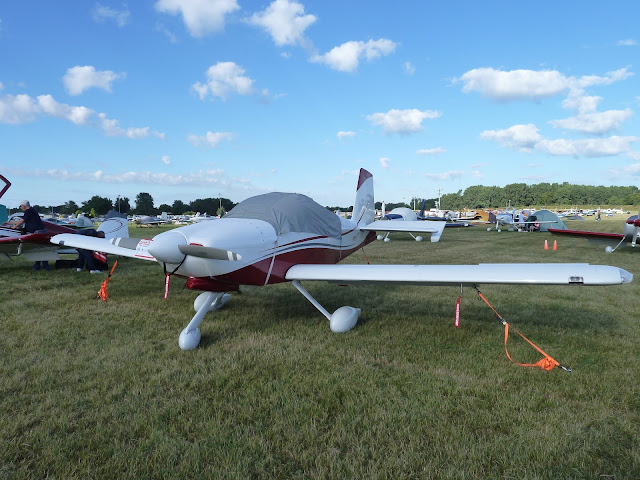 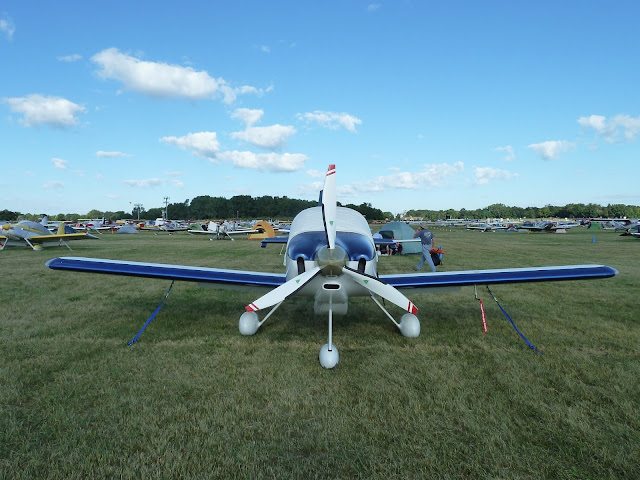 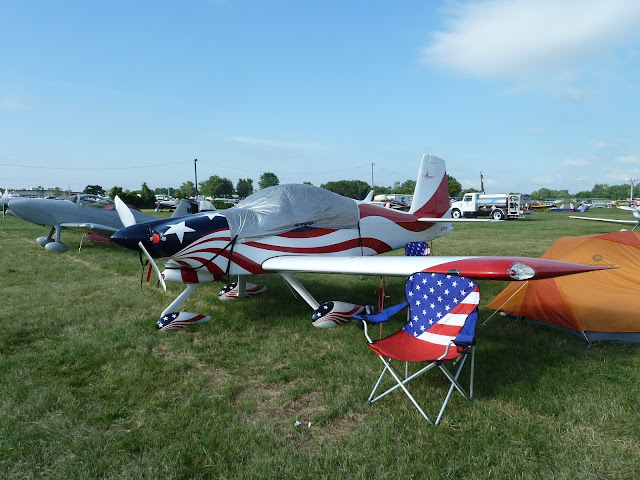 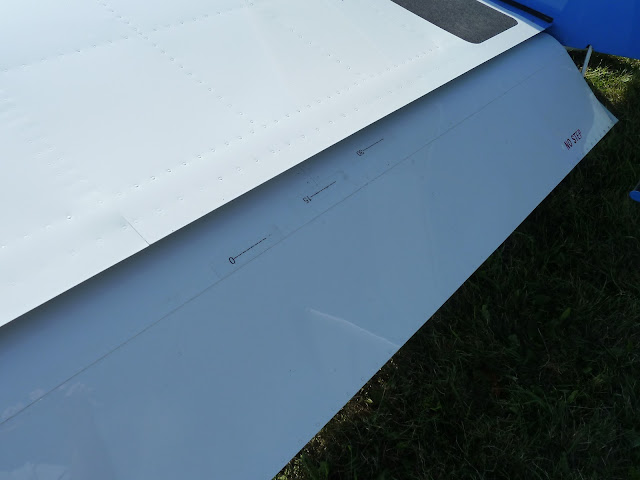 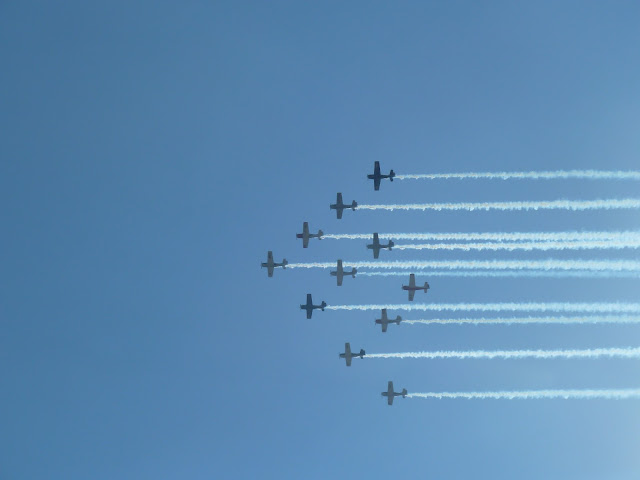 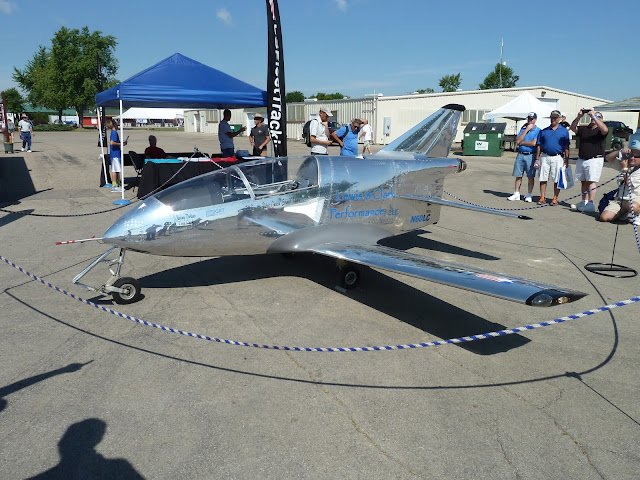