This week I am still without an airplane so I spent more time on the 10 and even more time in the hangar working on spiffing it up for its newly painted occupant.  Looking forward to brightening up the hangar a bit so this weekend with the help of Mariah and Harry I managed to get the new ceiling boards up and taped.  Next up is some drywall for the bare studs and then some nice white paint on the walls...  should really brighten up the hangar a lot.

On the 10 I managed to finish up the rudder, and get a start on the horizontal stabilizer.  There is a lot of deburring, drilling and such before anything starts going together.

On a side note I got a chance to fly with my friend Ben who built an RV-12.  I have never flown in a 12 before and it was both familiar and different.  Since its an RV it has the RV feel to the flight characteristics, but since its a light sport, it has far less power and speed.  It was still a great flight!

I don't know if Airplane-less is a word but it certainly fits my situation right now.  I have finally dropped the airplane off for painting!!!!  Jeff and I flew to Chilliwack BC on Friday to deliver the airplane to Upper Valley Aviation.  I will hopefully write up another post later on with more pictures that Jeff took.  I'm hoping to have it back in the next 3-4 weeks!

In the meantime I got a chance to get back to the RV-10 yesterday.  I started working on the trailing edge of the rudder and was able to get it riveted with better than expected results.  I used the 3M double sided tape to hold the AEX wedge in place as recommended by Vans but there was a slight wave in the unfinished product.  I decided to go buy a 1/2" stainless steel bar that was long enough to fit the entire trailing edge.  I then clamped the rudder to that bar (after putting in my rivets and tape) and then proceeded to rivet the edge together.  As you can see in the picture it came out great!

I also started on the leading edge roll process but wasn't able to finish that completely.

Posted by Darin Anderson at 6:26 AM 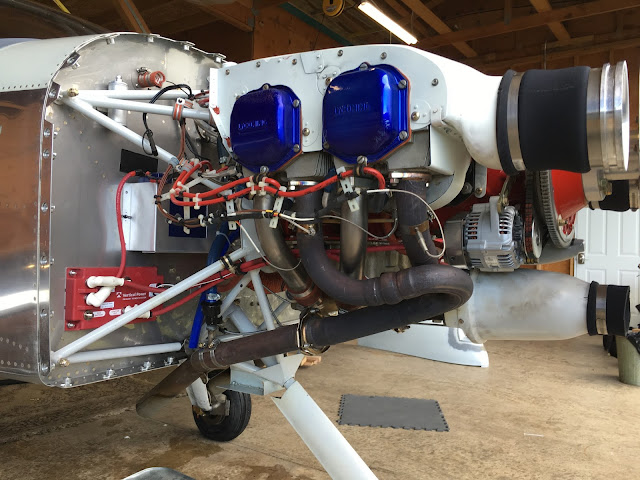