The weather has really sucked this week but I guess that means I am less tempted to go flying...hence more build time.  I spent most of my evening build time this week prepping parts for the fuel tanks.  Deburring and edge dressing mostly.  The weekend I began the process of putting together the right fuel tank.  I remember really struggling with this first step on my 9A but this time it went much smoother.  Either I learned something or the 10 skins are bent a little better (or a little of both) but I was able to get the right fuel tank fully assembled and almost ready to pull it apart for dimpling.  Before I know it I will be elbow deep in ProSeal. 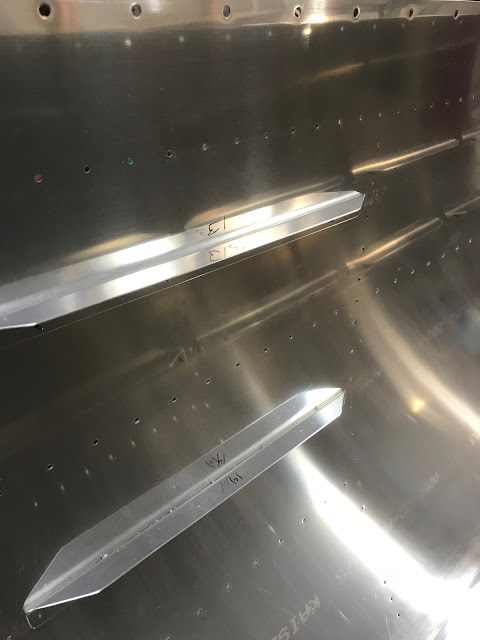 Posted by Darin Anderson at 5:39 PM

No pictures of RV-10 work this week mostly because I didn't do much picture worthy.  However, I did do something else picture worthy....I learned to do some aerobatics in a truly unique airplane...a Waco Great Lakes.  This is an interesting airplane in that it is a bi-wing tandem two seat tail dragger airplane.  Very cool.  I got to learn the proper way to do an aileron roll as well as a few other maneuvers such as loops, Immelmanns, Cuban eights, and even got a spin in there.  My stomach protested after about an hour so I had to call Uncle and head back to the airport but wow. what fun.  Harry set all of this up for us at an FBO in Phoenix Arizona.  He stayed down there for another few days to get a total of 5 hours of this stuff....his stomach is much stronger than mine! 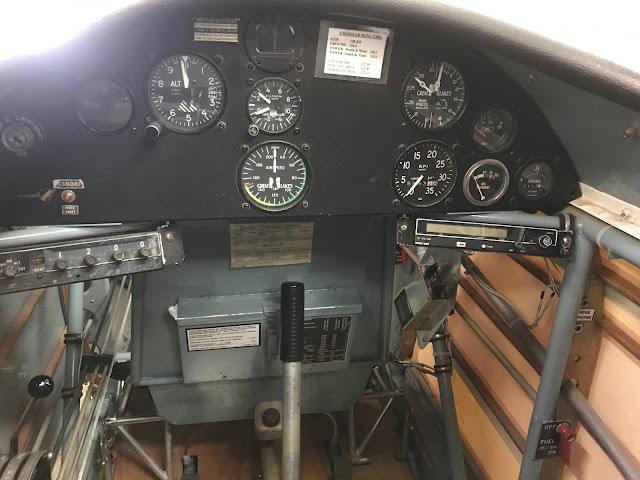 Posted by Darin Anderson at 6:00 PM

This week I finished up the flap gap fairings, did a little work on the bottom skins and since it started to warm up a little I started on the fuel tanks.

The first step was to remove all of the plastic protective film from the tank skins....what a pain!   It took my entire Sunday work session to get the plastic off.  Normally this isn't that much of a pain but this time the plastic came off but the glue that holds it down stayed on the aluminum skin.  This required a couple of hours of work with lacquer thinner and paper towels.  What a mess.

I seem to remember posting recently that I was going to start working on the fuel tanks next.  Well the weather has been a bit cold so I decided to finish up the wing flap gap fairings as well as prep the lower skins for riveting.  So, this week that's what I have been working on.  I managed to finish up the left wing, flip the wing rack around and get started on the right wing.

I did get a little bit of prep work done for the fuel tanks though.  I moved most of the fuel tank parts up to the garage and I fabricated some anti-rotation brackets to use on the fuel return line that will be installed in each tank.  The brackets gave me a chance to play with my CNC a little more and I am quite happy with how they turned out.  Not quite as nice as the smaller brackets that Van's provides for the fuel tank vent but close.


Somehow I forgot to post this blog entry.  This was originally suppose to be posted on the 28th but alas...here it is...a little late.

This week work on the leading edges continued.  These are really fun parts of the airplane to work on because they are big but there is relatively little detailed work (other than drilling, deburring, etc) and when you are complete there is a large visible portion of the airplane taking shape.  Next up is the fuel tanks which may take a little longer due to the sealing process.  Lots of Proseal (trade brand for a super sticky sealant that is fuel resistant and works great for sealing fuel tanks).  There will be a few modifications to the fuel tanks as well which will be fun.

Oh, one more item of note...I ordered the fuselage kit this week.  There is an 8 week wait period on that kit so I expect delivery some time in Feb/March.  Hopefully I will be done with the ailerons and flaps by then.

It's been a great past couple of weeks around here.  I've had 2 five day weekends in a row.  Add in lots of family and friends, and no small amount of flying and you have the mixin's for a memorable time.

Speaking of flying I spent a couple of days working on the 9 this week.  I have had heated seats installed in the airplane from the beginning but I didn't have them wired up.  Well this week I started the process of making that happen.  Last weeks flights proved to me that a little seat heat would do wonders in making some of those cold flights more bearable.  I didn't quite get to the point of hooking the seats up because I have to pull the seat panels and that is a long job that may have to wait until I do the annual inspection in the next couple of months.  However, I now have power available.

Another interesting thing happened with regard to the 9 this week.  Part of the rewire process is creating an "Essential" buss of power.  This bus has two power feeds, a normal from the master switch and a backup that comes directly from the battery through a fuse and a special switch.  On this bus I have moved both of my ignition power leads as well as power for the electric fuel pump and the G5 backup EFIS.  In an emergency where I lose the Master solenoid I can still fly the airplane.  However, the unexpected benefit to this change was that the airplane starts MUCH faster now.  In the past when I went to start the airplane it always took a couple of seconds to fire.  When I started it for the first time after making the change the engine fired immediately!  The only thing I can figure is that when I engage the starter my battery voltage is dropping far enough that the VPX is rebooting.  Since my ignition power was coming from the VPX they were not getting power until the VPX completed its boot cycle which is very short.  I may have to reach out to Chad at Vertical Power and see if anybody else has reported this.

Finally, related to the work on the 9 I had to do a test flight once all the work was done.  So, Harry and I saddled up and flew to Oregon to pick up a few supplies for some Apple Pie Moonshine.   Can't wait to see how that brew tastes!