This weekend I spent a lot of time cutting, polishing, deburring, bending, and vacuuming aluminum. I spent at least 8 hours over the past couple of days fluting and deburring the ribs and then getting them cleco'd up to the spars.  I then match drilled the lot, took it all back apart, and then proceeded to debur the holes, edges, and lightening holes.  Tomorrow I get to move on to the skins.

Travis came over on Saturday to help me move some stuff out of the garage and as you can see from the picture below I finally have my benches set up for building.  Still not ideal but its getting there.

I had a couple of neighbors come over this weekend and wonder what the heck I was building.  Its really fun watching the look on peoples faces when you tell them that you are building an airplane.  The first question is always "A model airplane?" I think one neighbor thought I was going to fly it out on the street!  :-)

Tonight I ran into my first problem.  I found that the edges of the rear spar of the horizontal stabilizer to not match up even though all the holes matched up perfectly.  I don't think this is a problem but I took some pics and will ask Vanns about it.  Regardless I completed the rear spar including attaching the elevator hinges. 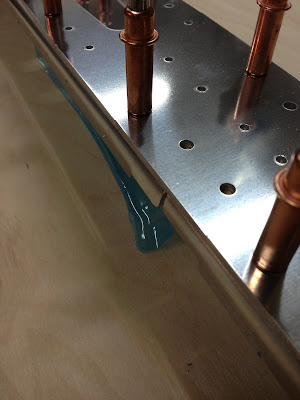 Posted by Darin Anderson at 9:07 PM

Tonight I managed to get the first three steps completed.  Total time so far 2:10.  This is going to take a while.  I do a lot of second guessing myself as I go from plans to drawing to parts.  Lets hope this first step is correct.  Here is a picture of the completed forward horizontal stabilizer spar. 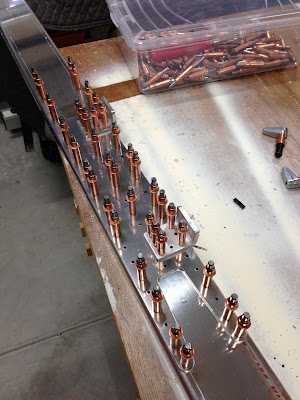 And here Amy took a picture of me with my old man goggles on. 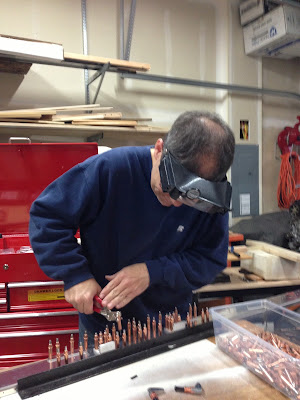 Posted by Darin Anderson at 7:42 PM

Today I managed to complete the inventory of the kit.  I'm happy to report everything was there except the one part that was on back-order.  I also managed to do a little rearranging of the garage, hangar.  Here's what I found on the inside of those boxes. 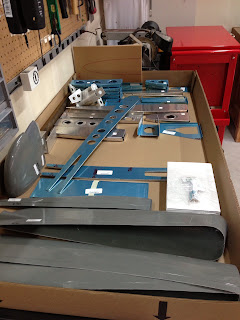 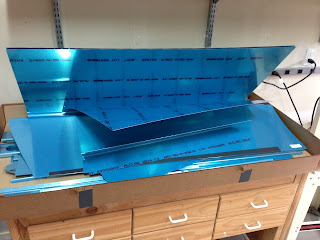 Posted by Darin Anderson at 5:48 PM

Email ThisBlogThis!Share to TwitterShare to FacebookShare to Pinterest
Labels: Empennage

Last Friday I took some time off from work and went south to Aurora Oregon to pick up the first piece of my kit.  This kit includes the tail of the airplane, aka the empennage. While there I got a chance to fly the RV-9A demo airplane they have.  WOW!  I am going to really like this airplane.

On the way back I stopped in Puyallup at Thun field to meet a friend, Jeff, and purchase his pneumatic squeezer.  Jeff built an RV-7A and was kind enough to answer many questions, show me his airplane, and take me up in his RV.  Today I can say that I have finally done a roll in an aerobatic airplane.  :-)

Anyway I got home and this is what my airplane looks like so far... 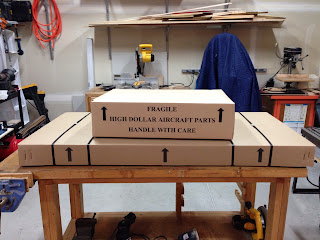 Posted by Darin Anderson at 5:44 PM

Why build an airplane?

Today begins a journey that I have dreamed about since I was in grade school.  I have always wanted to fly and for most of my childhood my dream was to be a commercial pilot when I grew up.  Obviously that dream did not come to fruition for a number of reasons but my desire to fly has never changed.  In the mid 1990's I took the plunge and began my flight training.  I was in the Navy at the time stationed in Bremerton Washington and learning to fly on military pay was not a trivial risk.  Needless to say the experience was everything I dreamed it would be, and more.  After about 47 hours of instruction time I took and passed my FAA check-ride, realizing my dream of being a pilot.

Ok, so now I have my pilots license, what do I do with it?  Well for a while I just poked holes in the air as I practiced my flying skills.  I took a few friends up for fun, and I even managed to get a couple of people into the plane that would not normally think about flying in a small plane.  It didn't take long for me to realize that the "expensive" part of flying was not limited to getting my license so gradually my flight time trailed off and eventually came to a complete stop.  That was about 18 years ago.

Over the past several years I have established my post military career and between that and family life I didn't feel I had the resources to get back into flying. I still maintained my membership in AOPA but even that was a year by year decision.  I felt a need to support the flying community with my membership but it was painful getting that magazine every month and seeing the things that were rapidly becoming a part of my ever increasing distant past.

Last month that changed.  My brother who lives in eastern Idaho called me up and asked if I would go look at an airplane he was interested in buying.  Uh oh, here come those feelings again.  Obviously I couldn't turn him down but I did curse his name and he promptly ignored me (thanks Jim).  Anyway not only did I go see the airplane that Jim wanted to purchase but nested in the same hangar was a completed Vans RV kit-plane.   Oh, what a beautiful sight!  Thus my desire to fly came back with a vengeance, not only fly but to own my own airplane.

The search began that day.  I agonized for weeks asking myself questions like "Can I afford buying an airplane?" and "Can I afford to keep and maintain it?"  The answer to both questions was yes, so the next question was "What kind of airplane do I want to buy?"  I really liked the Piper Cherokee that Jim purchased so I looked at a few of those.  None of them were perfect but you know what, sometimes you can't always have what you want!  When I realized I was thinking that way I knew I had to re-think this whole thing.  Why shouldn't I have what I want if it was reasonable?  I was going to spend a lot of money why not get what I wanted?  To answer that question I had to figure out what it was that I really wanted in an airplane.

After several hours of soul searching I came to the conclusion that I needed three things at a minimum.
Well, so much for the Cherokee, it only met one of those goals.  AOPA to the rescue.  That day I received one of my many AOPA email articles and there was one about a kit plane that was affordable.  Affordable? What is affordable?  So I checked out the article and the more I read the more excited I got.  Why shouldn't I build my own airplane?

Thus the search for the right kit began.  I have always been a fan of the Lancair aircraft, but trying to build one of those is like eating caviar on a Burger King budget.  I have also been a huge fan of the Velocity kit.  Big main wing in the back, canard up front, pusher prop, and that thing likes to fly so much its hard to get it to slow down to land.  But, its non traditional and I want something that I can insure and possibly sell someday.  Then I ran across and article on Vans RV's.  The last time I looked at Vans they were pretty much all aerobatic type airplanes with two seats (one behind the other).  I want my passenger up beside me and I am not all that interested in doing any aerobatics. Imagine my surprise when I found that they now do side by side seating, and they have a more docile cross country kit, the RV-9.  Hmm, I remembered my reaction to seeing that RV a few weeks ago in the hangar and things began to fall into place.

I discussed my thoughts with my significant other, Amy, and got a hearty thumbs up from her.  I did a lot more research into the RV and the more I read the more I liked what I saw.  Thousands of these aircraft are flying today, thousands!  A huge resource pool of very helpful builders.  A relatively local manufacturer.  And probably most important, a large number of builders have publicly documented their builds via blogs and other web sites like this one.

So, today I am heading to Oregon to not only pick up the first piece of the RV-9A (tricycle gear) kit but hopefully get a chance to fly a completed version of this airplane.  Thus begins the journey that plan on chronicling here on this blog.  Wish me luck!

Posted by Darin Anderson at 7:41 AM