Back to the fuselage

This week I have managed to get back to working on the fuselage.  After last weeks frustration with the engine I am happy to be back working on something different.  As you will see by the pictures below the forward part of the fuselage is coming along nicely.  Its almost time to mate up the front and back halves of the forward fuselage.  Once that happens things are going to get pretty tight in the smaller side of the garage. 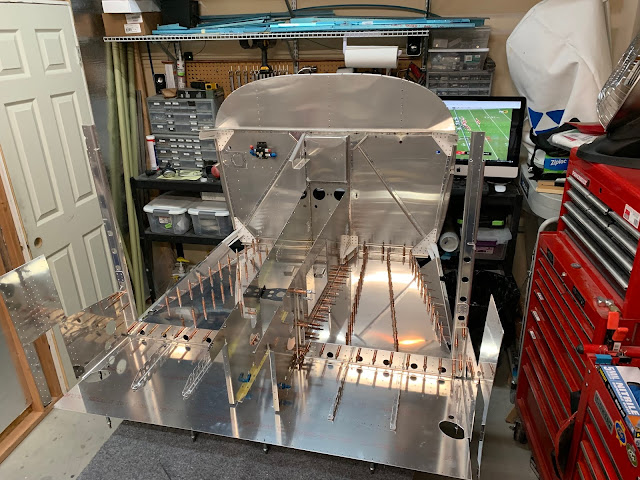 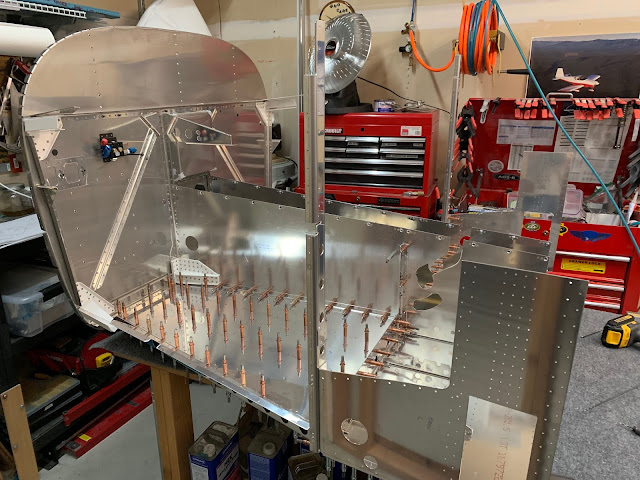 Posted by Darin Anderson at 1:38 PM

A week of engine work...and a little frustration..imagine that

I spent the entire week working on this engine and as of this evening its close to being done enough that I can get back to work on the fuselage.  However, and there always seems to be one of those, I am very frustrated with the engine right now.  Let me tell you a story... part of it you have probably heard already.

Remember a couple of years ago I took my engine over to Avian to have it overhauled?  Well that story keeps on coming.  This time I can't put all the blame on them because I could have prevented this as well if I had done a lot more research.  Anyway, when I dropped the engine off I asked them to convert it from an O-540 B2B5 to an O-540 D4A5.  My research at the time indicated that the only major difference was the counterweights in the crankshaft which makes sense because the B2B5 is a lower horsepower engine.  I wont rehash the horrible situation I had with the owner of that company but I mention this only because they are not an option to fix the problem I ran into this weekend.  As it turns out there is one other major difference between the two engines...the B2B5 does not have the internals to run a constant speed propeller!  What?!?  I didn't even know that was an option on the 540!  So at first this was a disaster for me since I expected the crankshaft was solid and it wasn't even an option to do a constant speed prop.  After doing a little research I found that the crankshaft will indeed work for a constant speed prop and that all I have to do is replace about $1000 worth of parts.  Oh...that and completely disassemble the engine and start all over again.   Frustrating!!!!  So you are probably wondering why I mentioned Avian in the beginning?  Well I was hoping/expecting them to make all changes needed inside the case to convert it to a D4A5 and in fact they did give me a new logbook that says its a D4A5.

I'm not going to disassemble the engine so I decided to finish up assembling the various parts so I can preserve it while I decide what to do next.  My current thought is I will have a mechanic tear it down and replace the parts.  Its not a hard job but getting down into the internals of the case makes me nervous so I would rather have somebody who knows what they are doing do that part.  Or maybe I will sell the darn thing and buy a new engine from Van's.  Not likely on that option because I have all the things I want in this engine and I'm still about $15,000 less out of pocket.  One final option I have is to install a fixed pitch Catto 3 blade prop.  I've heard of other guys who do this and love it but I don't think I will go that way.  The constant speed prop just gives me so much more takeoff power and with the gross weight this airplane will carry I think thats pretty important.

Anyway, here is what it looks like as of this evening.  The pushrods are installed in the tubes but they are not yet gapped properly.  The screws on the valve covers are just tight enough to keep the covers on and the oil inside but I did not torque those.  I also did not torque the accessory case cover bolts or the sump bolts.  These will all have to come back off.  I did torque the cylinders on though because Lycoming wants these bolts torqued at all times.  I've heard it has to do with case stresses and I've also heard it prevents main bearings from slipping when you rotate the engine.  I don't know if either or both of these are true but regardless the cylinders are torqued on. 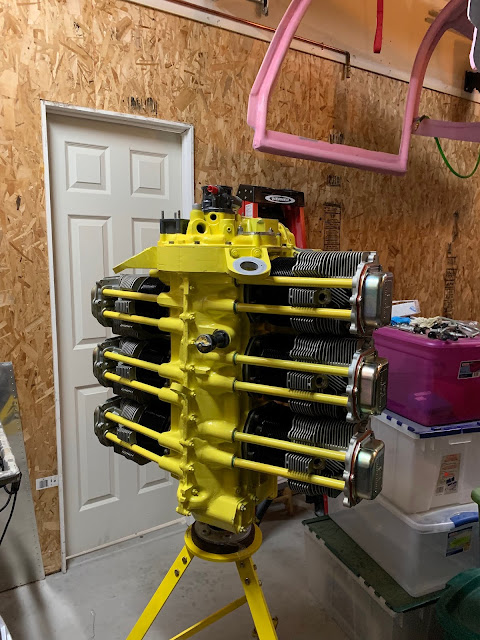 Posted by Darin Anderson at 6:17 PM

I received the sump I shipped to Divco for repair in the past week or two so I decided it was time to start assembling the engine.  I have it covered in plastic with a can of desiccant in the bag to prevent corrosion but I would feel much more comfortable if I knew it were filled with oil.  Once the cylinders are on and all external openings are plugged I can make that happen.

First up was to install the idler gears that set the timing between the crank and the cam.  This turned out to be pretty simple...once I found the marks that help with the alignment.  The Lycoming overhaul manual is definitely written expecting you to have lots of experience with these engines.

Next up is getting the cylinder assembled and installed on the engine block which is almost half done at this point.  I ran into a bit of a snag after installing and torquing all 6 cylinders.  When the accessory case is installed there is about a half inch of gasket that sticks down below where the oil sump mating surface is.  You are supposed to trim this excess off with a razor blade and then install the sump.  During my trimming process I managed to "flip" one of the cut ends into the one small opening that would allow it to fall into the case...the just completely sealed case.  I had to remove one cylinder to get access and in the process of trying to finesse the gasket scrap out I managed to nudge it just enough to where it dropped into another hole that I am really struggling to access.  I've tried lock wire, vacuum, cussing (because that always helps) and nothing has succeeded in making that scrap come out.  I'm not going to split the case so I decided to call it a night and think about it a bit.

Unfortunately for the blog this is a rather messy oily process so I didn't take many pictures.