Today was the first time in a long time that Harry, Jeff and I got a chance to do some flying together.  The original plan was to head south to Oregon but the weather down there wasn't really conducive to that so we planned for Yakima.  After takeoff Jeff was monitoring weather over in the Yakima valley and guess what?  Yep the weather went marginal over there.  We decided to head south and just fly around a bit and eventually wander over to Bremerton for some lunch.

We had a bit of excitement trying to land at Bremerton as there was a Cessna that wasn't really interested in playing along with the rest of us in the pattern, nor did he seem interested in talking on the radio.  So after a couple of 360 degree turns, lots of chatter about where he was, and even a go around we managed to get all three of us down on the runway.

After a good lunch we decided to follow Harry around the north end of Seattle, over the Snoqualmie Falls, and then back down to Puyallup where it seems everybody with an airplane had decided it was time to fly as well.  Fun!

Upon landing Jeff hopped into my airplane and we did an IFR approach into Tacoma Narrows, then the GPS back into KPLU.  We put away my airplane and then hopped in his airplane to do the same circuit with him at the controls.  We both agreed that we need to do this type of thing at least once a month to keep proficient!

Not many pictures of the day but I did get some video...haven't had much luck posting videos here so I have posted a link on Dropbox for those who want to see the flight.

Posted by Darin Anderson at 8:55 AM

Email ThisBlogThis!Share to TwitterShare to FacebookShare to Pinterest
Labels: Flying!

Wow, only two weeks since my last post...I must be getting better...not.

For the last two weeks I haven't done too much work on the 10 but I did re-do some work.  I had started putting the rudder together and after getting the ribs riveted together I tried to get the forward spar to fit.  Well guess what?  I had installed all of the ribs on the wrong skins!  That required some amount of cussing and then a long process of drilling out all of the rivets, and then re-riveting the entire structure back together again.  I'm almost back to the point where I started the week.

On a more positive note, yesterday Harry and I drove up to a house north of here and took a look at a 10 wing kit that someone was selling.  The work looked pretty good and most importantly there wasn't a ton of riveting done.  I really want to do the majority of the work on the kit myself but I couldn't say no to the huge savings I would get if I purchased this wing kit.  After looking at the work on both the wing, and the completed empennage I decided to purchase it.  Now I have a backup empennage kit that I can sell (assuming I don't mess up the one I am working on now).  Harry was nice enough to offer to come help me pick up the kit today!

Finally on my list of news I got to do some flying this week but I will save that for another post.

Posted by Darin Anderson at 8:39 AM

Another long hiatus from posting but I think I am slowly getting back into the build again.  I've spent a few days this past week working on the rudder of the 10 and I have a picture of two below to show the progress but I think more importantly you have to see what has been taking up all my garage time.

One of the downfalls of building an airplane in your garage is the dust and aluminum shavings that seem to get on everything.  Well for the 10 I decided to limit that as much as possible so I have partitioned off the smaller bay of the garage with a temporary insulated wall.  On that wall I have built a small "paint station" that I can use to spray primer on the parts that need it.  The neat part of the new paint station is that I have added a ducted fan to the base of it and am venting the exhaust outside.  Hopefully this will keep the overspray dust down a bit better than what I did with the 9.

Anyway, on with some pictures...

Posted by Darin Anderson at 6:06 PM 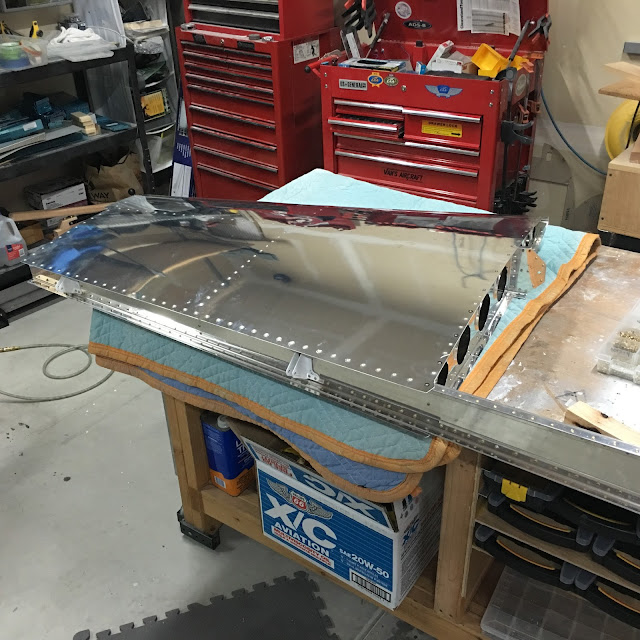 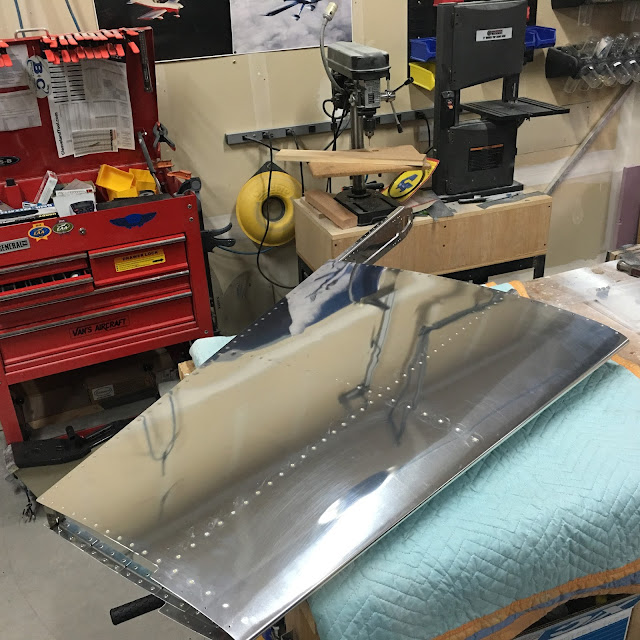 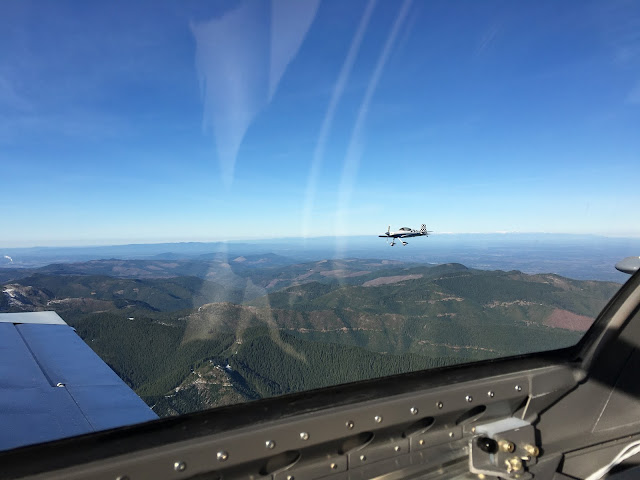 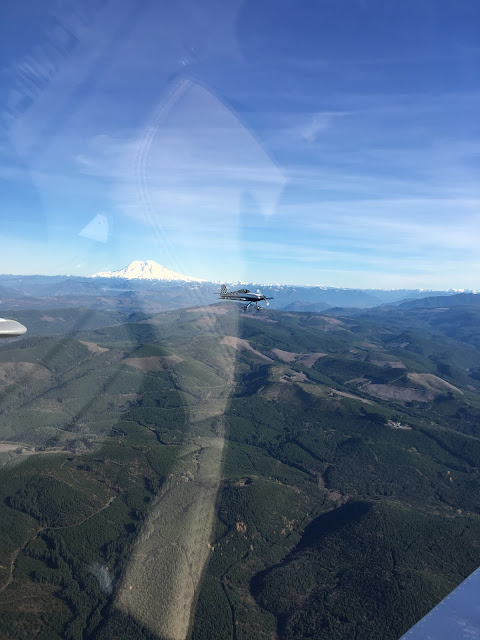 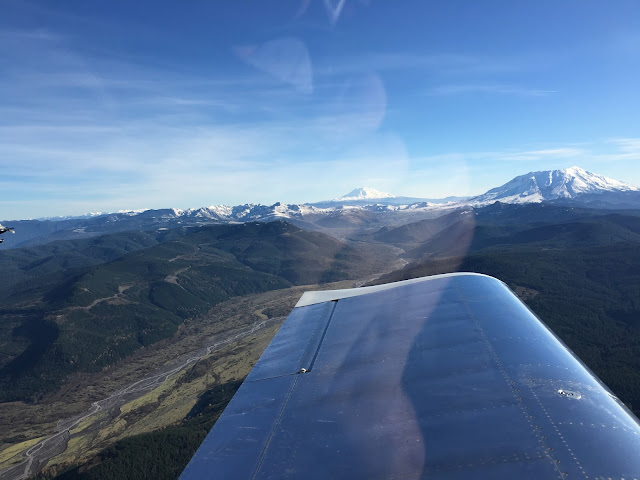 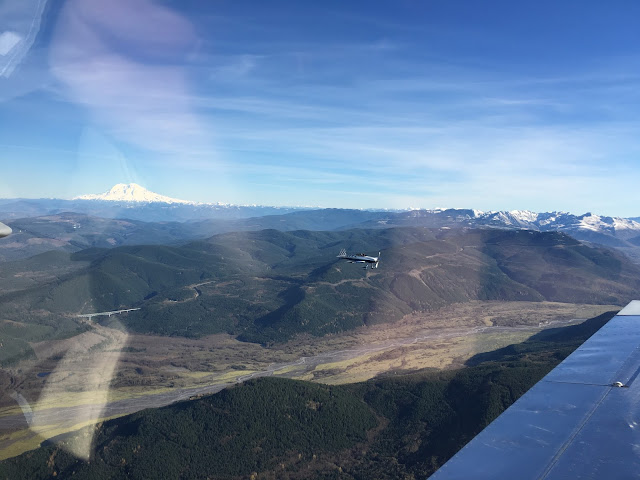 With the new job it seems like I have very little time to work on the airplane these days and I'm actually ok with that.  I am in no hurry to get this one done since I already have a wonderful airplane to fly.  However, Amy went to New York this weekend so I got a chance to do some work in the garage.  The Vertical is ready for some riveting but I need an extra set of hands for that so I've moved on to the rudder.  Nothing worth taking pictures of on the rudder so far since its mostly cutting out parts and deburring edges....

Posted by Darin Anderson at 9:13 PM

Long trip to the coast today.

Today Jeff, Chad and I continued our exploration of the airports of the PNW.  Today we ticked two more off of the list.  Forks (famous as the setting of the Twilight stories), and Quileute which has a HUGE old airport that is no longer in demand.  Here are a bunch of pictures...notice that I think this is the first time I've flown out over the ocean with this airplane.

I wish the camera could do justice to the beauty of this flight but it can't.  What you see in the pictures below is just a shadow of the majesty we enjoy in the PNW (Pacific Northwest). 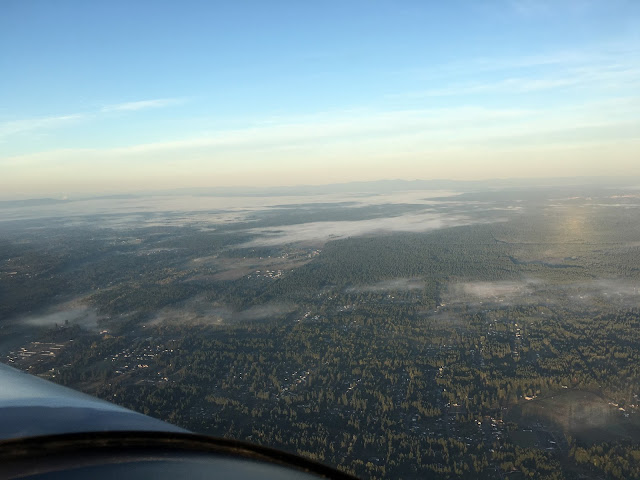 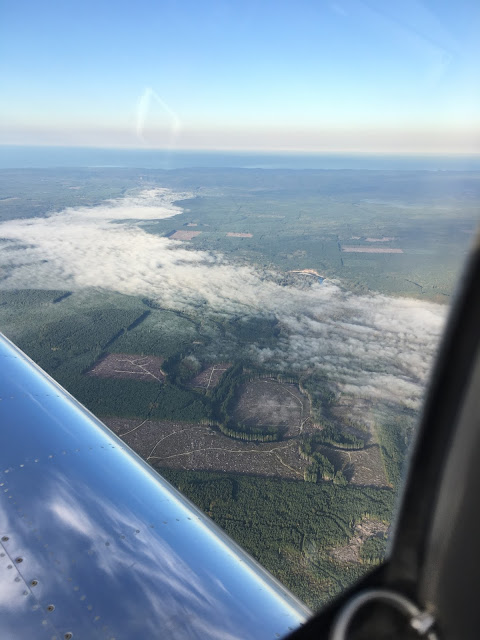 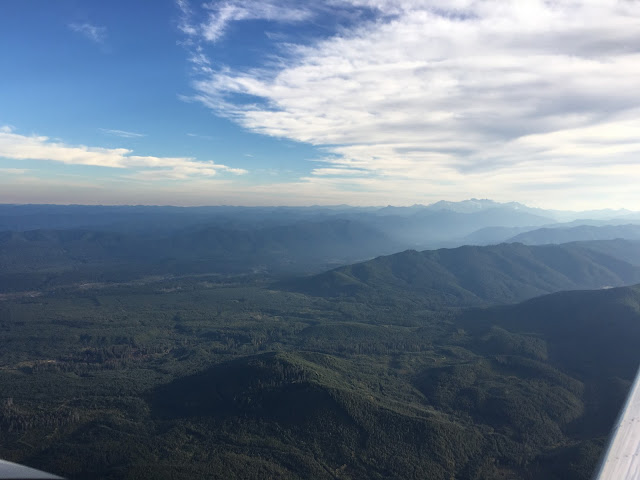 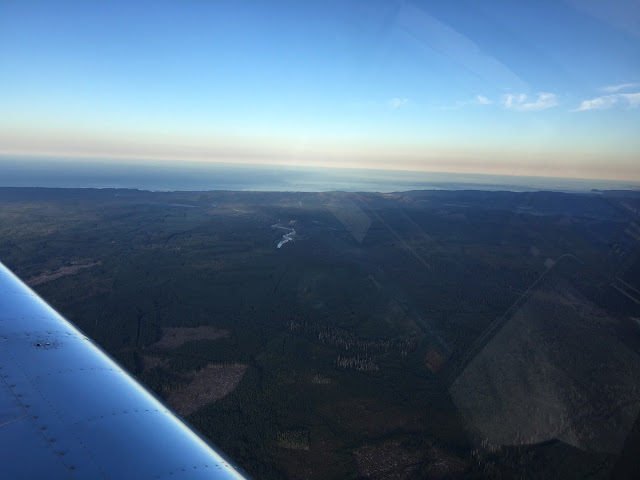 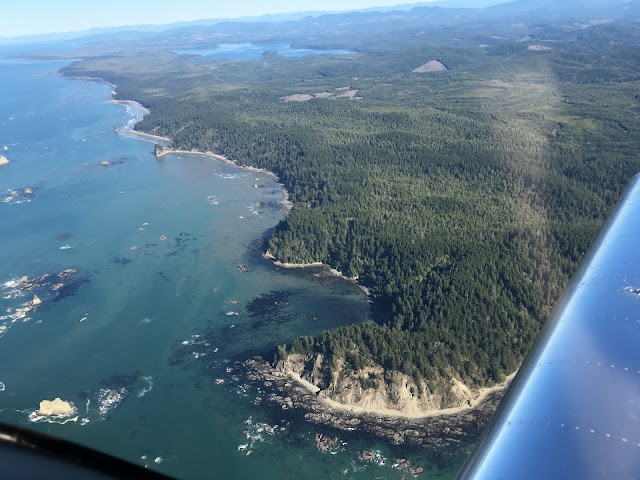 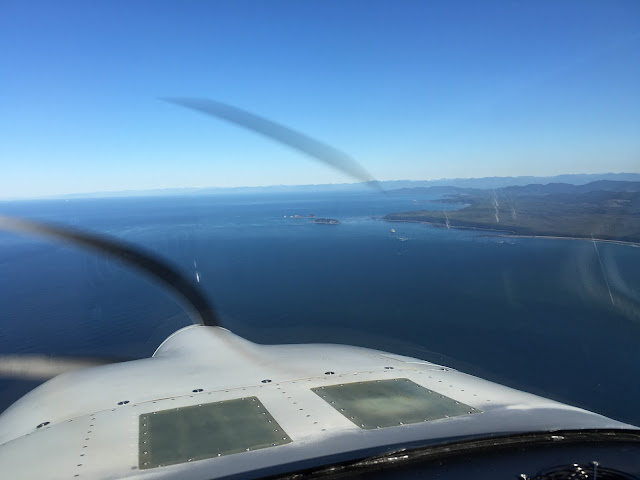 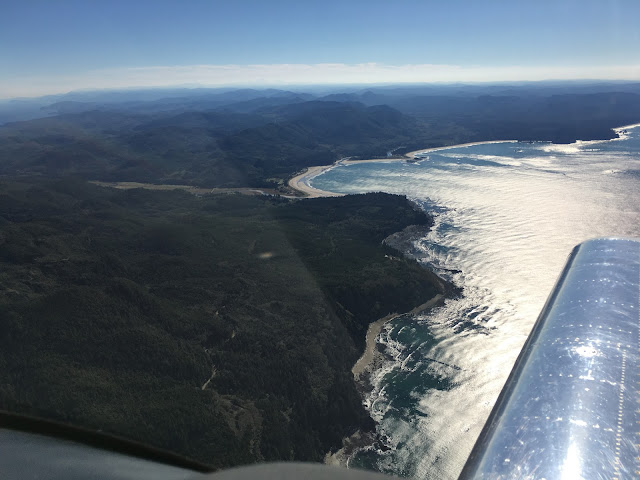 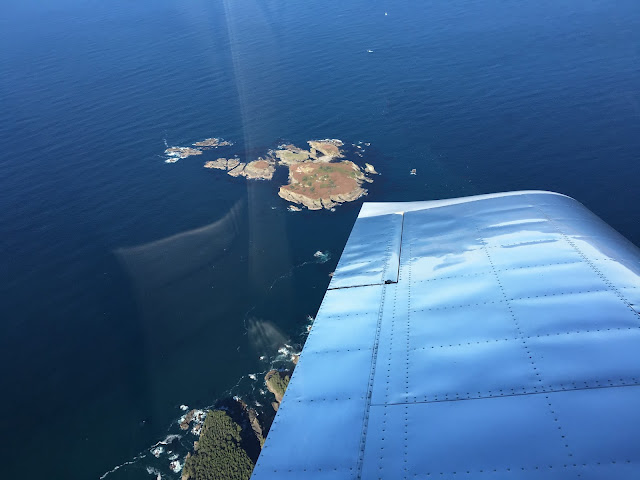 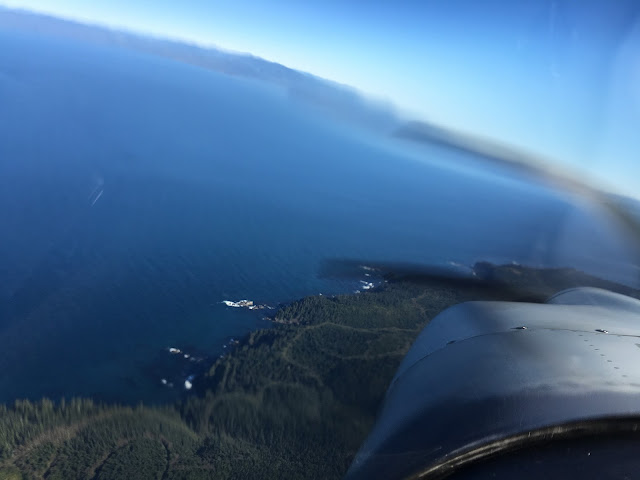 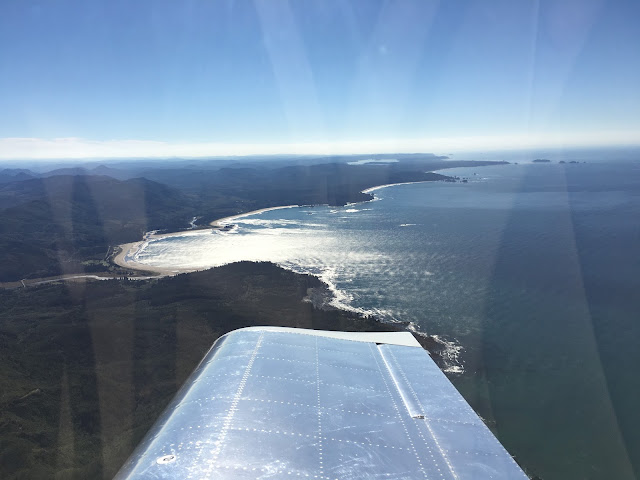 Posted by Darin Anderson at 7:11 PM

I've been promising my friend Gary that I would visit his home in Republic Washington for a while now.  Well that day finally arrived.  Jeff, Joe, and I launched out of Puyallup early Sunday morning (last week September 27th) and an hour an a half later we were landing in Republic.  Gary met us, took us to his place for a nice tour and then out for some lunch before we headed back to the airport.  I got to take Gary up for a short trip around the lake but I hope we get to go for a longer ride someday.  Anyway, here are a few picture.  Oh, with my new job and the flying I've been doing I haven't really worked on the 10 much.  As expected...