Ok, so the last couple of days have not gone well in Anderson Hanger # 1.  It all starts Saturday evening after a nice relaxing day of sanding, filing, and cussing at the rain.  The evening plan was to prime the parts that I had scuffed up during fabrication just as a "just in case".  Sounds simple enough, clean them up with Laquer thinner, then some Dawn dish soapy water, and finally use a little 50/50 vinegar and water mixture as an etching base.  Thats a LOT of steps and to make it worse I had to do some of it out in the cold rain.  Where did our 70 degree days go?

Ok, after some whining that nobody was around to hear I finally got to this point... 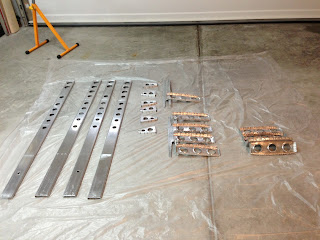 Parts all nicely laid out on plastic, ready for the non-toxic water based primer (EckoPrime primer/sealer) that I have been itching to use.  I got out my trusty HVLP spray gun, loaded up a batch of thinned primer and went to town.  Note that the primer is a nice white color. 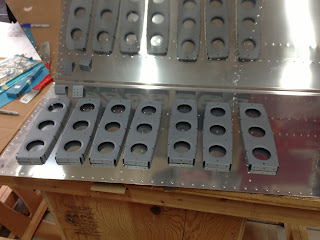 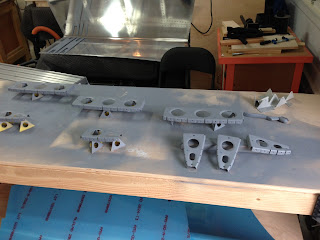 Wait!  That's not white!?!  Ok, so the white didn't go so well.  I guess the 50/50 mix of vinegar and water is not such a good etching solution.  When I woke up this morning to go have a look at my nice white primered parts, I found several areas of orange peel that came off with a shallow breath.  So, today I spent all day removing the white primer ( 6 hours), cleaning the parts again, and priming with Napa 7220 self etching primer.  I love that stuff, just clean and shoot, but has two drawbacks.  First, its expensive at $12 a rattle can and second it doesn't seal.  Neither were a big deal since I managed to get by with only two cans and these parts are never going to see the weather.

So, its back to the web site to buy the correct cleaner and etching compound.  Oh well, a lesson learned.

One more item for today.  I have decided I am not going to track hours spent working on this project like many others have.  I find that I am too competitive and as a result I feel the need to meet or beat other peoples build times.  I think I would rather enjoy the project and ensure I have the safest plane possible without the feeling that I am "behind".  That said, if anybody is interested I have over 50 hours so far into the project.
Posted by Darin Anderson at 5:55 PM